“There’s something just so satisfying about bobbing around in the ocean on a boat you’ve resurrected from the ground up, knowing every nook and cranny as it hurls you forward on epic little adventures. It’s knowing the vessel’s story from beginning to end,” says Gordon. “Boats are funny that way; superstitions and folklore add to the depth of the experience.”

This is a piece I did last year for the print version of Outboard Magazine. The publishing group did some restructuring and they recently ran my story on the Power & Motoryacht site. I dig it because it combines boatbuilding, surf, travel and creativity. 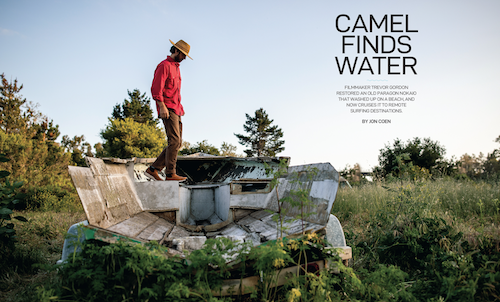 Trevor Gordon, a notable Central California filmmaker revived an old Rincon fishing boat from a busted up hull and created an amazing little surf exploration boat that became the subject of the short film “Camel Finds water.” The whole undertaking and imagery here are just fascinating.

The boat’s story is something of legend. It was a Paragon Nokaio, known to some as a “Maui Cruiser,” originally built in Hawaii. To the best of Gordon’s knowledge, a boatbuilder from Seattle had obtained the mold and produced them out of Washington before selling the mold in the early ’80s to another builder in Santa Barbara. Rumor has it that four boats were made during that time before the mold literally broke. One of the four was built for an urchin diver who sold it to a fisherman. It reminded Gordon a lot of that Radon 24 from his youth.

Five years ago, the boat was anchored off one of the nearby islands when a wave broke over it and washed it onto the beach.

Unceremoniously dragged from the water, the wreckage had been sitting on a friend’s abalone farm for years when Gordon came across it. “It didn’t have any stringers or structure. The transom had been ripped off. It was just basically a shell,” Gordon recalls.

He went to work, replacing the transom with marine plywood, adding a foot to the length and rebuilding the gunwales, which were missing a foot forward of the transom, with simple molds. Next, he began redesigning by what he could read from the shadows of the existing hull. He built stringers and calculated the size and placement of the cabin.

Gordon pokes fun at his own abilities. He made up for lack of experience with patience, motivation and a lot of YouTube videos. “I rented a little piece of land right in the canyon at Rincon from a friend. His family owns thousands of acres so they gave me a little piece by the road. I got an RV tent and a generator and set up a janky little workshop zone for the summer months and hoped it didn’t rain.” 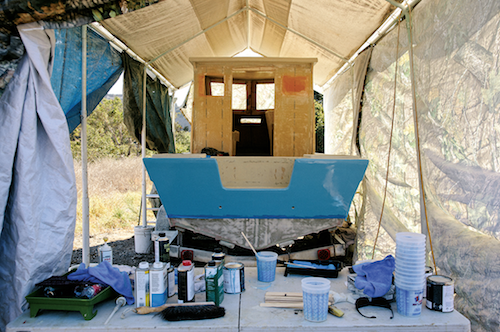